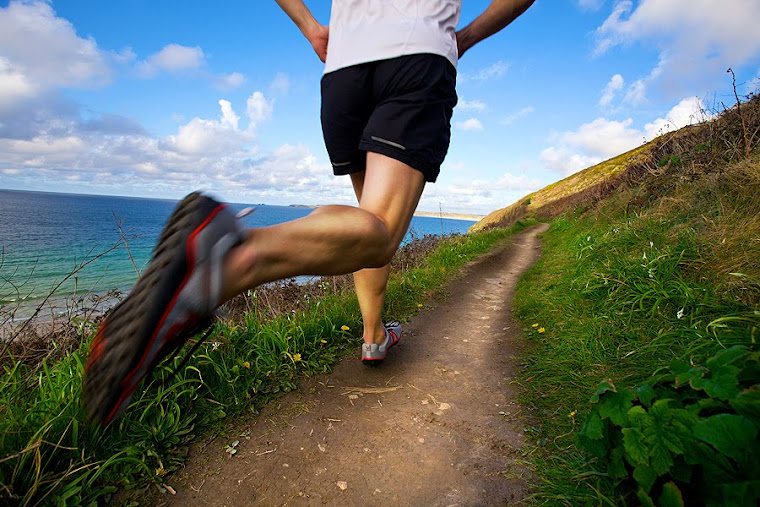 The main factors that can be controlled in runners are technique, equipment (footwear) and


overuse. All of these factors can produce injuries independently but they can also all be related to

each other. For example over supportive cushioned running shoes can lead to incorrect running

technique resulting in excess stress (i.e. overuse) to the body, in particular the lower extremities

that running is a natural activity for humans. In theory it should be but modern lifestyles and

footwear have had a negative effect on the way humans now move. Thus technique should be the

focus of an injury prevention programme, although overuse and footwear are also intrinsically

In a study of a group of middle and long distance college runners, it was found that

Saretsky, Daoud, & Lieberman, (2012), showed those that were rear-foot strikers (RFS) were

apply high loading forces to the body which in turn can lead to injury from repeated stress.

Until the Daoud study (2012), foot strike patterns and their effect on injuries had not been

studied but the results show that technique is very important in preventing injury. However,

Foot-strike also varies depending on the ability of the athlete. 936 recreational runners were

studied while running in a marathon and observations made at the 10km mark show that 88.9% of

them were rear-foot strikers. Interestingly, by the 32km point this percentage had increased even

When relating these results to the increased injury rates in RFS (Daoud, 2012), there is

their technique. Those runners in the Larson et al (2011) study that switched from a FFS

to a RFS at 32km, lacked the level of conditioning to maintain their technique through to the finish

line. The FFS places a larger eccentric load on the calf, achilles and foot architecture in the process

of absorbing GRF naturally. When these structures fatigue, the natural course of action would be to

the overworked areas. In effect this is what the runners in the study were doing by switching to a

RFS and continuing to 'run' on their heels.

Dias Lopes, (2012) describes most of the injuries cited in his study as being overuse

injuries, due to, “overloading the musculoskeletal structures of the runners”. He goes on to

most common injuries of the foot”, explaining that the foot can only absorb the increased

GRFs when running if the plantar fascia is resilient. Ankle dorsiflexors tendinopathy was

common among the ultra marathoners studied, indicating overuse of the dorsiflexors due to

heel-striking or a potential lack of dorsiflexion in the ankle.

posture and consequently running technique and potential for injury (Lieberman 2012). All theses

factors are controllable and once identified can be improved over time.

Overuse injuries, although traditionally thought of as simply training too hard, can also be

related back to musculoskeletal weaknesses. Simply put, if a structure is not strong enough to

withstand the force acting on it then it will fail. Modern lifestyles result in reduced flexibility and

figures in runners with poor technique, particularly those that RFS (Lieberman, 2012).

of the majority of amateur runners and even some sub elites. Top performers tend to run with a tall

and upright stance and a high cadence resulting in a FFS where they land lightly on their feet. They

training, both from an injury prevention and a performance perspective. Using the knee, ankle, hips

and spine as shock absorbers creates potential energy which is released in a spring like manner,

In fact, of the GRF acting on the body while running, 35% is absorbed by the Achilles

tendon and 17% by the plantar fascia (Alexander, 1991). This action protects the knee but cannot

heal lift (which prevents the Achilles stretching). In this case, particularly when heel striking, an

unnecessary amount of additional shock is taken by the knee joint, explaining the high rates of knee

In conclusion, technique is a risk factor that can be controlled, as is the strength and

flexibility of the body's lower limbs, particularly the foot and ankle.

Running is promoted as a great exercise for becoming fit and healthy, for prolonging our lives and preventing or recovering from western lifestyle diseases. Unfortunately running is also associated with a very high percentage of injuries.

Because running is so good for our health it is very important to prevent injuries that restrict our ability to run (Fields, Sykes, Walker, & Jackson, 2010).

The fact that running is a natural form of human locomotion appears to be at odds with the
injury figures. It is therefore important to establish which are the common injuries associated with running and whether they can be prevented.

Statistics from the NZ Accident Compensation Corporation (ACC) show a total of claims for
July 2012-June 2013 in excess of 29,000. Total cost for that year is $6.6m. These figures relate to all injuries incurred while jogging.

When isolating the injury search criteria to the ankle, foot, lower
leg and toes, the statistics show almost 15,000 for the same period for a total cost exceeding $2.3m.

Detailed statistics dating back to 2008 (www.acc.co.nz) are shown in Table 1.

Clearly, jogging as a form of healthy exercise is proving very injurious for many people.

Coming from the ACSM this is huge - the paradigm shift is happening.

So they know their stuff!

The ACSM have changed their position stand on what to look for in a running shoe. In fact compared to 2011 this new statement represents somewhat of a u-turn and will potentially help to knock down a few more walls in the quest to help everyone enjoy injury free running for life.

Remember that just changing your shoes is only the start and won't directly improve your technique without understanding how humans are designed to run. Search out a qualified and experienced coach to set you on your way.

So it's summer in this part of the world and where better to hang out than the beach?! The warm weather and warm sea is very conducive to a bit of exercise, the most natural being running and swimming - and the best thing is you don't even need any special kit! The health benefits to be gained from being in the sea and running barefoot in the water are great, especially from an earthing point of view and from soaking up that all important Vitamin D...but that's another story.

For now here are a few tips to improve your running technique using the beach environment:

- Run on the water's edge in a couple of inches of water. This will encourage you to lift your feet higher and move your legs in a more cyclic motion...if you continue in an old 'jogging' heelstriking motion with the legs swinging like a pendulum from the hips you will trip in the water and fall flat on your face. Well maybe not but you'll certainly kick a lot of water around making running difficult.

- Run on hard sand so that your feet get the sensory feedback they need. Sand that is too soft is hard work and can cause overuse injuries to the untrained and is much like running in cushioned shoes in that it's easy to heelstrike without realising.

- Check your footprints in hard sand. They should be one in front of the other in a nice line. If not then you are wasting energy with too much sideways movement. The print should be of even depth throughout. Deeper in the heel and you're probably heel striking, deep toes and you are pushing off too hard and not lifting the feet enough.

So there you have it, get down the beach and get moving, get fit, get healthy and live longer!

NOTE: The Barefoot Running Coach cannot be held responsible for any abuse aimed at the runner if they are wearing speedos...sensible running shorts or baggies advised.
Posted by Karver at 00:46 No comments:

The National Academy of Distance Running

So the latest from New Zealand is that after several months of travelling and looking for a suitable location to live, train and coach, I have found the perfect spot. Nelson, top of the South Island has the most sunshine hours in NZ and just happens to be home to The National Academy of Distance Running.

I am about to embark on a Post Graduate in Physical Conditioning, focusing on endurance running and the benefits of conditioning through proper technique, correct programming and natural nutrition, among other things.

My mentor is Greg Lautenslager, the world class runner and head coach at the The National Academy of Distance Running - he is very much on the same page as me regarding barefoot technique and we will be working together to raise the level of running in the Nelson area and NZ as a whole.

So anyone keen to learn more please get in touch - all levels, abilities and goals are catered for from beginner to elite!

Looking for advice and info on barefoot running? I am currently in New Zealand setting up The Barefoot Academy (www.thebarefootacademy.co.nz) but I'm still available by email for any barefoot help, including coaching - I have coached various runners all around the world via the wonders of the web so even though I am no longer in Cornwall please still get in touch. Even better come and visit us in sunny NZ! 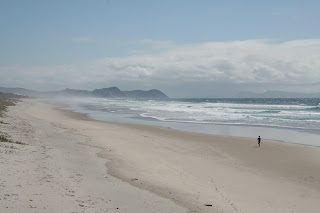 The most common question I am asked on a near daily basis is...why barefoot?

So here is an answer to start you thinking...

As in all skill sports, correct technique is vital if you want to become proficient and avoid injury. Running is no different, although most of us don't consider having lessons in running.

In theory we shouldn't need to learn how to run as we are born with the innate ability to move quickly across the ground in an efficient manner - watch a toddler running around barefoot and their feet will contact the ground on the forefoot. Then watch amateur adult joggers pounding the streets and you will see an injurious form of motion that is not at all natural - landing on the heel while running is not what we are designed to do and as well as putting the brakes on with every step we are also sending excess shock up through the legs, hips and back causing many joint problems.

80% of runners are injured every year, yet running is one of the most natural things a human can do - something has gone wrong!

In a nutshell we have forgotten how to run thanks to the invention of overly cushioned and supportive shoes. Our feet simply need protection from the elements, they do not need support. In fact supporting the feet (our body's foundation) will weaken the feet and result in overuse of other muscles causing unnecessary injury. The cushioning in the latest state-of-the-art running footwear prevents the 200,000 nerve endings in the soles of our feet from sending feedback to the brain and controlling the way we move - imagine wearing mittens on your hands all day and trying to perform even the most simple of tasks! We rely on sensory feedback to enable us to be the amazing machines that we were designed to be. Dumbing down that feedback creates unnatural movement.

To improve anything in life there has to be change. To take a leap forwards with your running and to strive for a lifetime of efficient and injury free natural movement, you need to take a small step backwards and remember how to move as a child. Barefoot.